Choosing a Narcolepsy Service Dog Candidate: What I Looked for in a Pup

It was a clear blue morning in Dewey, Arizona. I had carefully selected a German Shepherd breeder that had a history of producing healthy pups. I had called to inquire about puppies from an ad hidden deep within old internet forums. The day I called the breeder was the day that my service dog candidate was born.

I couldn’t believe my luck! So there I was, just a few weeks later, getting the first pick from a gaggle of paws and ears and tiny ravenous mouths. I had read piles of books on the subject of puppy training and selection. There were a few key things that I was looking for while selecting my narcolepsy service dog candidate. 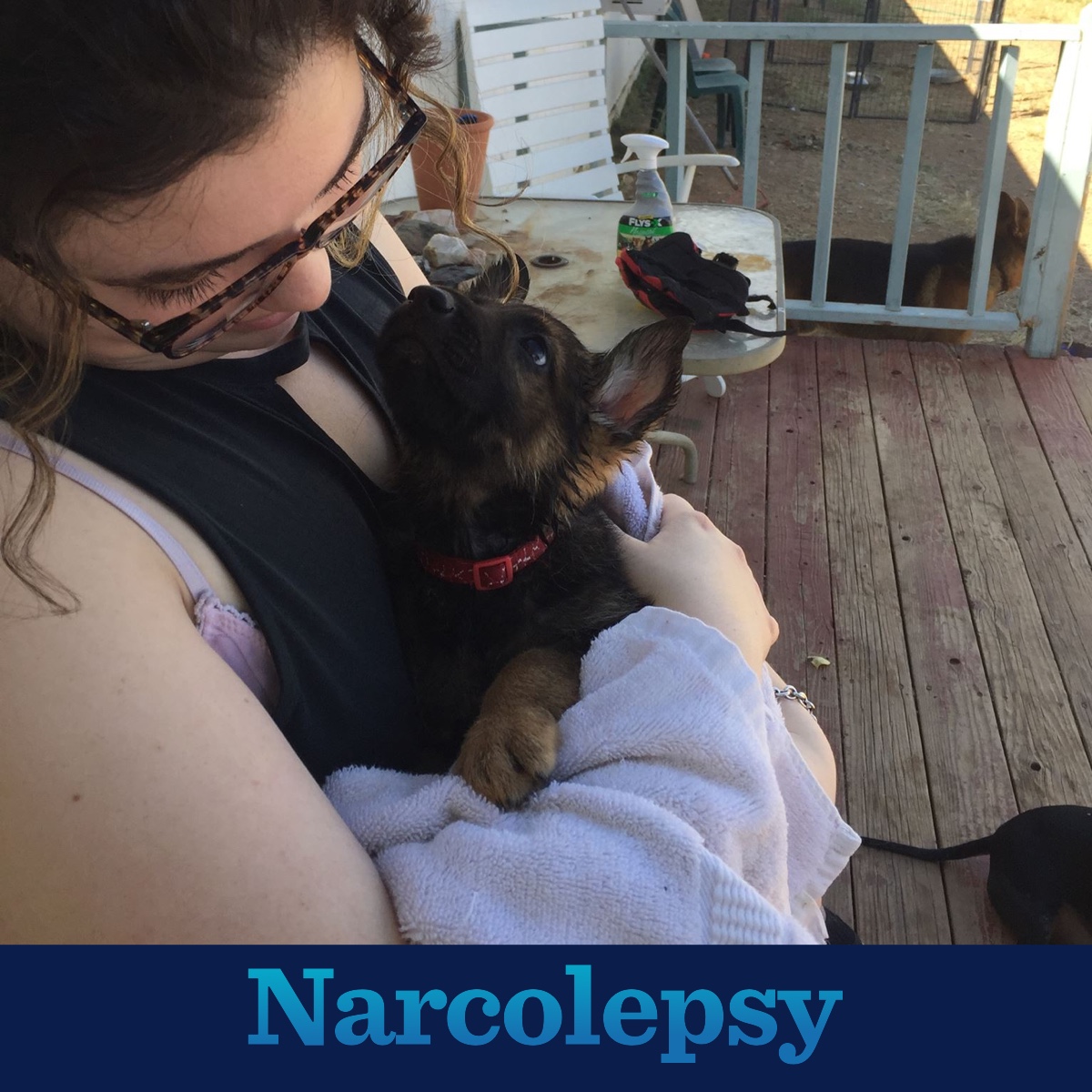 I wanted a candidate that was in between these two extremes. A stubborn dog would prove more difficult to train but would have a natural inclination towards fearlessness. After all, you wouldn’t want your narcolepsy service dog cowering from every strange store display that crossed their path. However, if a candidate is “too” brave they might be more motivated to interact with their environment rather than their handler.

Reaction to being held

Second, I tested their reaction to being held. This test consisted of holding the pup like a baby with their bellies facing the sky and observing their reaction. Pups that struggled and fussed endlessly might be ornery. Puppies that succumbed to their fate might be passive.

I wanted a candidate that was slightly more passive. This was due to the fact that I was choosing from German Shepherds. This breed has higher energy levels than many. I felt that choosing an ornery candidate would make my life more difficult!

One pup stood out

Third, I tested their food and play drive. I wanted a candidate that would be sufficiently motivated by their rewards during training. One pup stood out to me above all the rest during this testing stage.

While all of the other pups were looking at my hands to see if they wanted what I had, one pup stood away from the crowd and observed my face. Her deep brown eyes were piercing. When I beckoned to her, her fat puppy body shouldered through the crowd to greet me. At that moment, I knew who I was taking home.

Choosing my service dog candidate was more of an art than a science. In the end, I gathered as much data as I could and then made a decision based on my gut. Here I am two years later with an owner-trained narcolepsy service dog.

She performs on a similar level as service dogs trained by professional organizations. Training her was a difficult journey, especially while living with a debilitating disease like narcolepsy. However, it was worth the improvement in my quality of life.

Do you have a narcolepsy service dog or have you thought about getting one? Join our community and share in the comments below!

The Importance of Advocacy: What I Want the World to Know About Narcolepsy

What Not to Say to a Narcoleptic

9 comments
This article represents the opinions, thoughts, and experiences of the author; none of this content has been paid for by any advertiser. The Narcolepsy.Sleep-Disorders.net team does not recommend or endorse any products or treatments discussed herein. Learn more about how we maintain editorial integrity here.

Do you feel that others judge the severity of your narcolepsy based on how you look?