Attempting to Face My Fears

I’m annually reminded of how special my life has been on World Narcolepsy Day. This year has been exceptional, though, as I have hit a milestone birthday.

A kid-free, 4-day excursion for my birthday

Most people would have large parties, surprises included, with lots of friends, family, etc. to celebrate such a milestone. Though I would like that kind of super celebration, I find quiet, calm and being removed from excitement much more appealing for my day.

I did manage a special birthday trip where my friend and I took a kid-free excursion to Utah for 4 days. We went to a fantasy-themed park called Evermore. It was a ton of fun, but the Halloween theme had me a bit nervous through the late evening after-dark parts when the more spooky and specifically haunted parts started.

We dressed up in medieval-style outfits and set about discovering the mysteries of this fantasy world – the most interesting and exciting part was adventuring in this live-action interactive experience.

The park was well set up for accommodating people with mobility issues and children of all ages, and they let you interact or not as much as you liked. It took me about half the first day to actually figure out how to interact with the characters in the park, as well as how to best invest my time so that I got the most out of this lovely gift.

My companion was more apt to watch me talk than to interact themselves, but I guess I didn’t mind so much other than the issues I have with memory. The story was intricately laid out to meet with different folks throughout the park and help you work through the story that would help engage attention. Honestly, though, it took a lot of my energy just to start the process.

I could say I like talking to new people, but I avoided the larger groups of congregating people that caused me anxiety. I also forgot to mention the 90-degree heat at 6 PM that took every ounce of moisture out of my body. By the second day, I was not only exhausted but had to stop and rest to avoid sleep attacks that manifested quickly in the heat.

I was nervous about possibly triggering my cataplexy

The first day of exploration went off without too much of a hitch until we decided to try The Haunt. This was the first time I had been to anything spooky since high school, and I was quite nervous about how my body would react given my fears. Strong emotions can trigger my cataplexy, and though I had prepared with a medical ID and having a trusted friend, I had doubts that I should attempt a feat so great.

Earlier in the day, the park allowed you to walk the path with only the props set up. We had walked a part of it that had sound effects that were enough to send a chill up my spine, plus a jump scare to boot. Thankfully that did not give me any issue, so I was pretty confident things would be fine.

Once the time came, we headed to The Haunt. My friend asked me if I was sure about walking through it, and though I stated, “No, not really,” I still wanted to try, as it was a part of the experience.

I spent the time waiting in line explaining what happened in high school: I had gone to a haunted house, and about halfway through I had melted into a puddle on the floor in terror, resulting in an emergency exit from the attraction. Despite this knowledge, I said I had to try.

I crumpled to the ground and couldn't move

We entered the tavern where they gathered the people to enter. I thought this group would be going together until I realized they let each party out one at time. I tried to put on a stern face but my entire body shook knowing what lay ahead.

The same sound effect that scared me when it was still daylight did the same as we entered the pathway. I could see the first creature that waited to come and it followed us. My instincts immediately took over as I screamed in terror and attempted to flee. I only got a few steps before I tugged my friend's hand and my body crumpled to the cobble-stoned ground.

I actually couldn’t move for several minutes and lay sobbing on the pavement. Though I had not had a full cataplexy event, the moment I attempted to pull my friend along actually resulted in a knee buckling. Besides the fear, I was now embarrassed to move, as I could not imagine how I was to proceed given that the first scare had caused me to fall.

My friend kindly picked me up and walked me to a point where we could exit the path. I probably scared the actors more than they scared me because I was so terrified. Needless to say, I won’t be doing that again, but it was a good try.

Scary stuff is not my forté

Despite the first day's scare, the second day was much more enjoyable, and I was able to complete most of the park’s storyline available during this opening weekend. Lesson's learned, though, that scary stuff is not my forté. 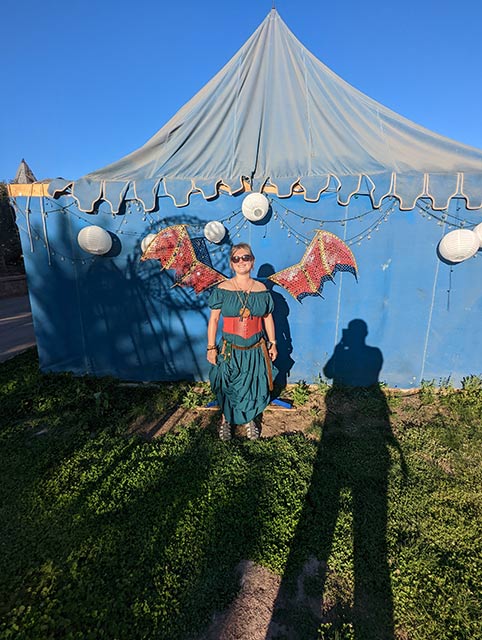 Have you ever gone outside of your comfort zone and faced a fear despite the risk of experiencing narcolepsy symptoms like cataplexy? Tell us all about it in the comments below!

How a Daily Routine Helps With My Narcolepsy

5 comments
This article represents the opinions, thoughts, and experiences of the author; none of this content has been paid for by any advertiser. The Narcolepsy.Sleep-Disorders.net team does not recommend or endorse any products or treatments discussed herein. Learn more about how we maintain editorial integrity here.

Please read our rules before commenting.

Have you taken our In America Survey yet?